A unique side of Oahu awaits when you take to the sky to discover the sights you have yet to see. Your tour will begin as you fly over Honolulu’s famous harbor as the Aloha Tower welcomes arriving ships into the port – just as it has done for nearly 100 years. Heading further down the coast, you’ll pass the beaches of Waikiki and then do a slow loop around majestic Diamond Head, peaking into the center of what is arguably the most famous landmark in all of Hawaii. Then, with wide open Maunalua Bay passing beneath you, you’ll reach the island’s rugged eastern shores and Hanauma Bay’s well-known reefs. Following the rocky coast, you’ll reach the little lighthouse sitting atop the cliffs of Makapu’u and pass the longest stretch of beach on the entire island of Oahu. You’ll then travel up the Windward Coast, to visit world-renowned Lanikai Beach and the aptly-named Chinaman’s Hat. You’ll explore the lush forests and emerald cliffs of the awe-inspiring Ka’a’awa Valley and fly in close for a view of Oahu’s highest waterfall, Sacred Falls. The tour will end with a visit to the Dole Pineapple Plantation and low-altitude views of Pearl Harbor and the USS Arizona Memorial. A side of Oahu many do not know will reveal itself with a tour of these sights unseen. 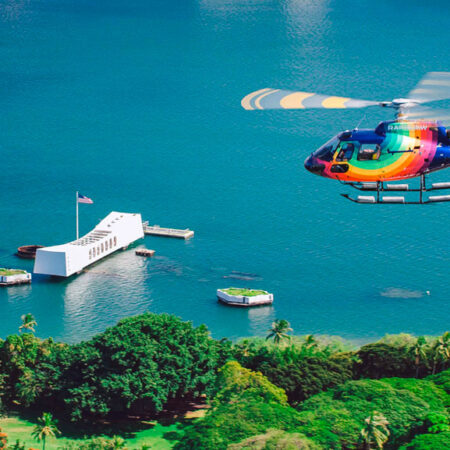 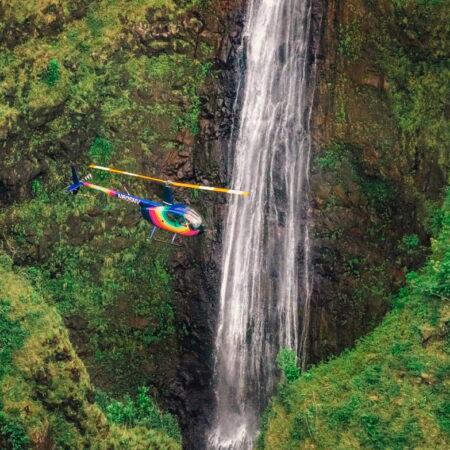 Novictor Aviation offers a courtesy shuttle to and from all hotels in Waikiki. Hotel pick-up will be at the main pick-up location for all tour shuttles at hotel. In addition, our shuttle will also pick-up from Honolulu International Airport and Pearl Harbor.

Great skies reveal legendary landscapes, sapphire waters, and world-famous attractions born of Hawaii’s amazing empire on this royal ring helicopter tour around Oahu. You’ll begin with expansive views of the Waikiki skyline built upon the sugary sands of the esteemed surf beach of the Pacific. Rising to new heights, Diamond Head’s tiara will appear before you, as it reigns upon the South Shore exercising it’s natural authority over The Gathering Place. Rounding the million-dollar ridges, you’ll pass Hanauma Bay, watching as gentle, sandy beaches turn to jagged volcanic cliffs carved out by the relentless surge of the rough waters below. On your way, you’ll glide over top of the charming Makapu’u lighthouse to witness her radiant red beam outward to unknown ships at sea. As you continue your tour up the island’s Windward Coast, you’ll see the storied Ko’olau mountains in the distance, quietly watching as you pass over Lanikai Beach – often called the most marvelous beach in the world – and the offshore sandbars and coral formations that make Kaneohe Bay one of the most picturesque places on Earth. 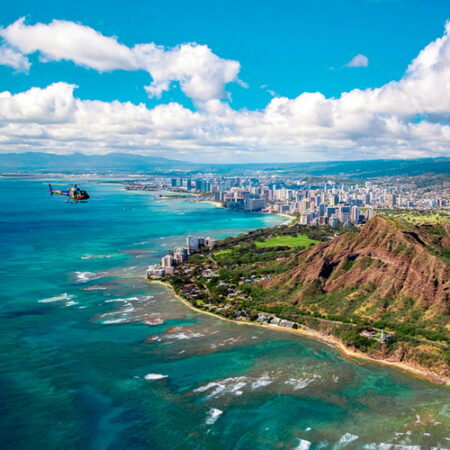